I visited California for the first time in December 2008.  John and I stayed here for two weeks, visited his parents, and took a road trip from San Francisco through Monterey Bay, to Los Angeles and San Diego.
I wrote this poem in early 2009, as a reflection of my first impressions of my future home.

Author's note: John, whom I refer to in this poem is my father-in-law, John Senior. 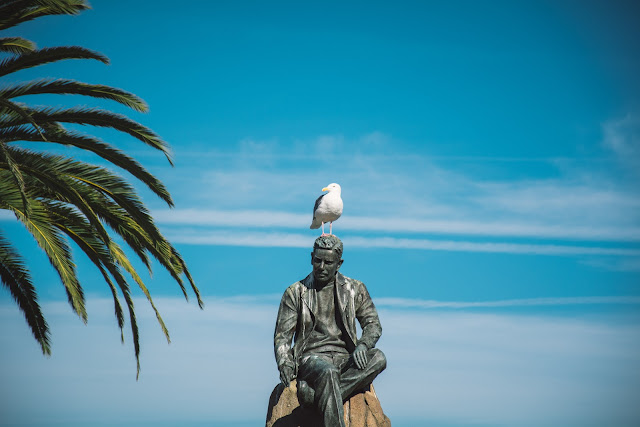 The red eye -- one perpetual sunset,
An eleven hour flight without a night.
The solar disc slides along the edge of the Atlantic
And sets the horizon on fire.
I finally witness that the Earth is round,
Curved below the Boeing's belly --
Big as dreams.

My westward gaze: half blinded, itchy eyes
That cannot stay open much longer.
Blink and you'll miss it:
The Promised Land.

My first road trip, like in the movies, but real.
Not glamorous, nor romantic, surreal.
I'm carsick, homesick
On a three-hour drive down Monterey Bay
On Big Freeways built for Big Trucks,
And my face is glued to the window,
Trying to read every sign.
I've never seen such traffic, such speed.

We stop at a diner in Salinas
And order breakfast for dinner.
There's too much ice in my coke,
And I marvel the dimes and the quarters
Like I've never seen money before.
It's too late to visit Steinbeck's Museum
For it's finally night
And I think I am dreaming.

A dirt road loops through the mountain
Just outside Carmel Valley.
Headlights in the woods:
The woods are still charred by last year's fires
And the air is dry, and the red dirt is dry,
And the sky is black and rainless.
I am thirsty, cranky -- that's a long way
To come and not to be there yet...

As I step out of the car the world keeps moving
But I stay still and I'm stunned into silence
Because I can see The Milky Way above
And the Pastures of Heaven below --
A house on top of a hill,
No streetlights, no power lines,
Two dogs, a water well, Madrone trees.
We sleep fast under thick wooden beams.

The mountain blushes to the East.
The house John built feels ominous no longer
But a home flooded with light; a little cluttered,
With curious objects in every corner
With pictures of babies and weddings,
With dogs sleeping in chairs,
And it smells of coffee and sausages and vanilla and smoke and herbs.
"You've seen nothing yet," John tells me.

Hey, Monterey!  The Canneries are gift shops now
But I tune in, hoping to detect some mysterious vibration
Left over from olden times,
Hoping to be touched by greatness and not be afraid.
The Bay is aglow with high aperture sunbeams:
What a treat (the view and the cotton candy)!

John tells me stories from the 70's,
And urges me to write them down
Before everyone forgets -- hippies living in boats,
Artists painting murals, carpenters and cowboys,
Jazz legends and ordinary vagrants, writers
And now, me.  My pen works rapidly --
I am overwhelmed and underslept,
And distracted by the Big Sur view.

The Pacific... nothing calm about this one.
A liner ship as small as the dot at the end of a long sentence.
Seals resting on rocks (so cute!).
Yellow hills, red cliffs, green succulents, purple wildflowers.
I'm anxious and my eyes are big: this is a Big Deal,
My being here.  I buy expensive souvenirs
That imitate a priceless life.

We're headed for L.A. the next day:
A seven-hour drive that makes my butt/brain numb.
Southbound on the 5 past small inland towns,
Past factory farms that smell of death,
Past oil pumps and vineyards and tobacco fields,
Past a car burning by the side of the road,
And past a whole lotta nothing, until
Eventually we hit traffic near Santa Barbara.

Mexican food for dinner in Pasadena with the whole family,
That gives me heartburn.  I am very new to all this.
I've read about it but it's different when you're the protagonist...
Our hotel is something out of a Stephen King novel,
And the AC rattles all night.
Chinese food for lunch in Santa Ana with the whole family,
And a Tea Ceremony.  I am too European for all this...

Forget it.  You can't walk there.
You can't walk anywhere, really, because California is Big
And the sidewalks are empty of people and history.
Only palm trees and liquor stores and nail salons,
Only suburban houses and strip malls and drive thru's.
"Is that it?," I ask John. "Is this America?!"
"Just wait and see..."

I see:
The Hollywood sign from the end of a private road,
Tent cities down the Walk of Fame,
Los Angeles sprawled in my feet from the observatory,
Film Studios, Taquerias, Sex Shops.
I see good looking people everywhere --
New money and no style.
L.A. has nothing on me.

I count my cigarettes.
I count the days we have left before we go.
I feel better once we are back North:
Jack Kerouac was here, and that's something...
A little culture, I think bitterly.
Coastal breeze and hybrid cars,
Beatniks and Big Tech.
Now we're talking.

A Big Red bridge, stretched across the Bay,
Its ropes -- thicker than my neck,
Its ropes -- ringing in the wind,
Photographed a million times
By pros and amateurs, and even by some Buddhist monks.
Today, I take the pictures.  Eight hundred so far,
But I'll need it later to help me decide
If California is really such a good idea.
Can I make it here?  Can I make a home here?

We walk around China Town: home of immigrants
Like me, who came on boats and Boeings
From across an ocean, from a world away,
Like me.
They sell dragons and jade and seafood;
We buy custard cakes and T-shirts
That say I ❤️SF.

What a day to get lost!
It's Christmas morning in eerie old hangover Frisco.
But I can't afford to lose my way
On another uphill street.
Ironically, I am not a genius poet,
And I don't even know how to drive.
"Oh, Big Whoop," John says.
"As far as I'm concerned, you're at least half-American."

It is time to leave, but not before
I ride ponies and go tobogganing
Down a Tassajara ridge on a thin layer of snow,
(It will be long melted by 10AM)
With the dogs running behind me
And John laughing at me.  It is high time
To allow myself to let go in order to settle down.
I had fun time here, Big Time.  I can have a good life here...
And what's wrong
With a little California dreaming, anyway? 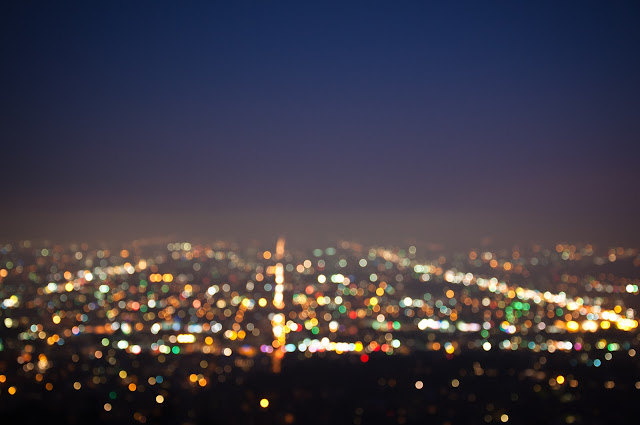 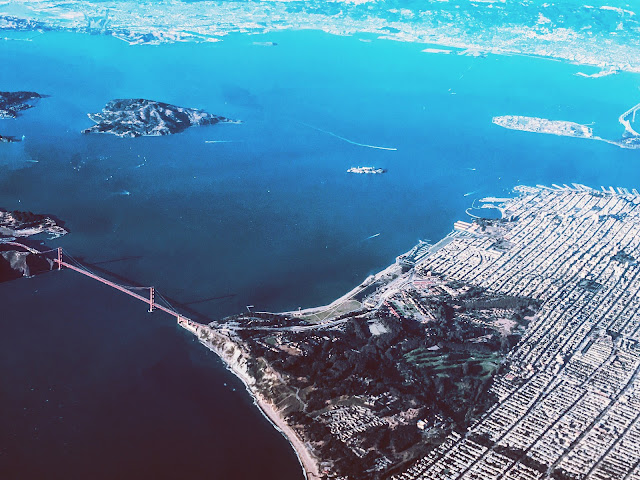