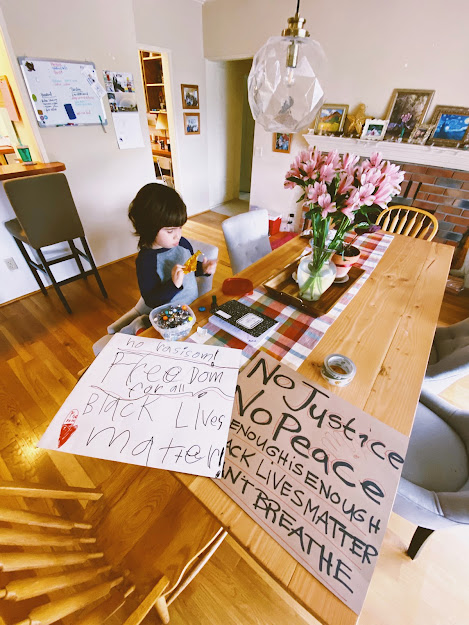 *Reflections on the movement I've had while also trying to stay healthy in a pandemic, and raise two boys in the country.  You can also follow these topics on my IG.
On community:
I’ve been thinking a lot about how the concept of socially-oriented politics is so difficult to understand and accept (and about socialism being a dirty word) here in America.
The BLM movement inspires me for numerous obvious reasons, but also because so many of the changes it demands are well aligned with my own conviction that the wellbeing of the community should be of utmost importance for us as a nation.  Investing in people not in institutions of oppression and marginalization is an empowering ideal.  Much of the inequality issues we witness today stem not only from politics but from economics; disenfranchised people who are being deliberately pushed to the fringes of society are also sick people, stressed people, unhappy people...
Why is it so hard to believe that equal opportunity is a good thing? (Possible answer: corporate greed, white power and desire for dominance.) But when the majority of the people are doing well, they are also better capable of contributing to the greater good instead of being limited to fighting for their mere survival.  Systemic racism is cunning and cruel that way.  It prevents BIPOC from participating in the American democracy by suppressing their voices, creating all these obstacles, excluding them from the dynamic, forcing them to believe that their contribution isn’t needed or valuable.  Which is simply not true!
And since capitalism has allowed white Americans to be the central figures in society and politics so far, and has awarded them success by virtue of privilege, it is only natural for the model to fail.  Aside from fairness and justice, it also lacks balance and sustainability, and what we see now is the most logical reaction: BIPOC are reclaiming their right to be an inseparable, crucial and important part of American society, by any means necessary.
I’ve never heard a white politician speak on these issues as clearly or eloquently as any Black activist.  At the end of the day, people are what matter the most, families and community, humanity.
Black lives matter in every single possible way; they will not be discouraged and dismissed any longer.
Black lives deserve to stop being judged, scrutinized, and subjected to violence and oppression.
Black lives matter. 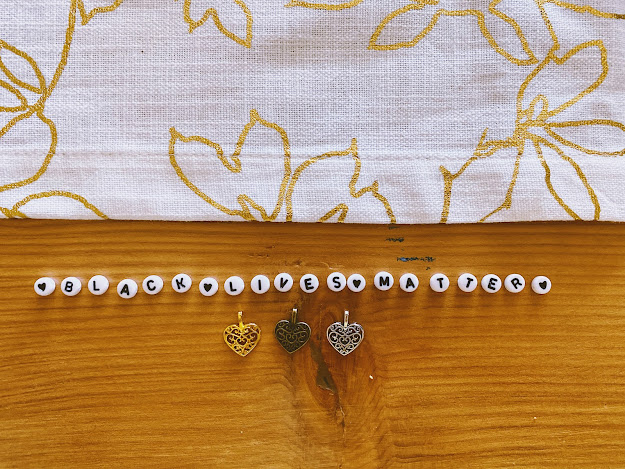 On entitlement:
Let’s talk about entitlement.
When I moved here in 2010 a big part of the cultural shock I experienced was how easily (white) Americans believed that they deserve it all, that they would only settle for the best.  This narrative was very new to me (an Eastern European born in the early 80's), and I was astounded by the way people acted as if they’ve never been told NO in their lives.  I didn’t have the same conviction that “I can do anything only if I set my mind to it” because I had the perspective of so many roadblocks and challenges that didn’t seem to exist for white people in this country.  This sense of ownership over both material things and one’s fate was foreign to me; the conviction of default and inherent privilege...
Whiteness, as in entitlement and privilege, is overwhelming in America.  It’s overbearing and exhausting.  I have never strived to be this way; I work hard for my luck but I am aware that it won’t always turn out right, that it won’t always be my way.  Happy endings, envisioning success in order to manifest it, personal growth, wealth, freedom and independence—these can be a good thing in itself but they are also an illusion of American whiteness that put so much false pressure on everyone else, and are usually a tool of oppression and maintaining superiority.
In America you should be allowed to be who you are without trying to measure up to the standards of whiteness. 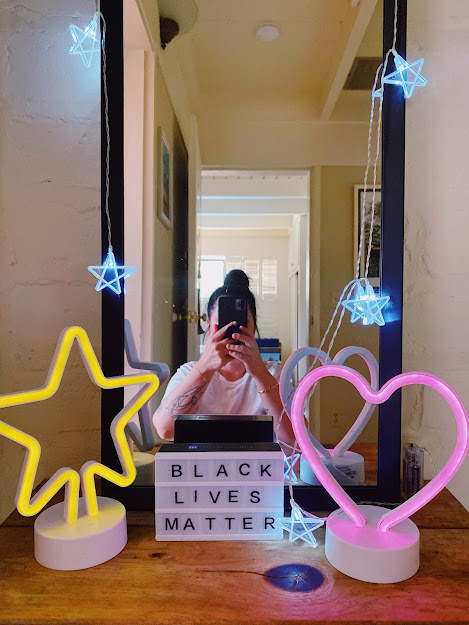 On beauty standards and race:
Of course, race is an artificial and false social construct, so I mean this in a cultural way, not scientific.  Historically, in the West, beauty has always been associated with thin and fair, as a deliberate and opposing reaction to full and dark, which was the appearance attributed to Black women.  Think as far back as the Victorian age, at the height of the Trans-Atlantic Slave Trade, when white women were encouraged to be the “angels of the house”, confined to the domestic sphere, disconnected from the real world and put on a pedestal of virtue and delicate vulnerability.
This isn’t only a feminist issue, it’s also an important racial equality one (intersectionality) since it was then when all the stereotypes and myths about Black women were created to maintain their oppression as inferior and uncivilized people.  The black body was ridiculed, exploited, violated, and dehumanized through acts such as parading black women for their derrière size, forced head coverings, and denial of access to any type of education other than as servants and agricultural workers (and rape was rampant).
Feminism cannot exclude the intersection between women’s rights and race, as it is directly related to so many political and economic events that led to our current situation.  It wasn’t until the past 20 years when Black became on the forefront of beauty and empowerment standards, with hair/nail styles, body shapes, music and performance, and fashion being finally celebrated in the mainstream.  I think about this all the time.  I love all women, but I am particularly protective and appreciative of Black women for their journey to self-love and acceptance has been made more difficult than any of ours. 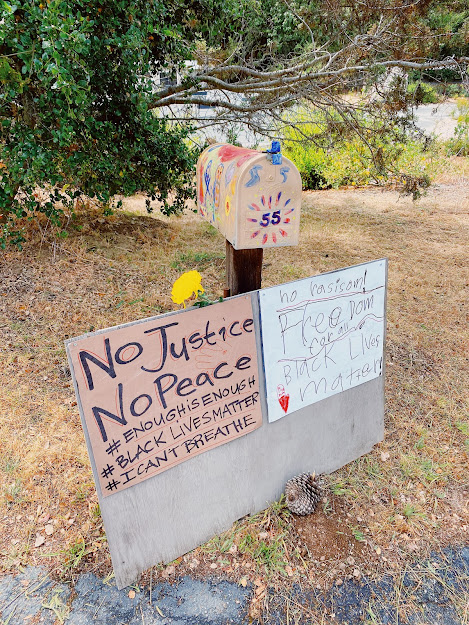 On the enormity of the task ahead:
When you read or hear that the work will be hard and it will take a long time, this is because it will take an enormous GROUP effort to eradicate racism in ALL of its manifestations and forms.  We need to reform not just the police, but also the prison system and judicial systems, most government structures and institutions, corporate practices, the health system, the schools, EVERYTHING.
We need new laws, such as FINALLY condemning KKK as a terrorist organization and we need to enforce these new laws (minus the brutality).  We need to change the way our entire society operates, and evolve our collective culture to reflect the values of justice and equality we identify with as a nation.
And this will take generations. So buckle up, accept that everything is INTERCONNECTED, and do your part.
(Sorry for yelling, capitalization originally from Instagram) 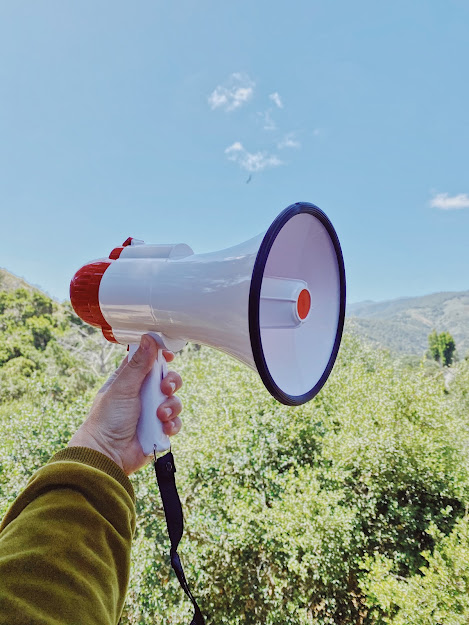 Legalize everything:
“Everything is racist these days”, they shake their heads and tsk tsk.
Lol.
Everything has BEEN racist for centuries, but the majority of people accepted it as a fact of life and did little to nothing to stop it.  Absolutely almost everything is racist in America.  Not just the stupid statues and confederate flags.  It’s so embedded in the culture it’s almost impossible to recognize.  But it’s right there in plain view.  Disney has been stereotyping black, Asian, and Indian characters for decades.  Products for black skin and hair are kept under lock in stores.  Companies turn a blind eye to micro-aggressions and offensive jokes all the time.  It’s not just the police.  It’s the society as a whole.
It’s the schools that teach a mere 1% of black history only one month a year.  It’s Columbus Day.  It’s derogatory language used with reckless abandon every day as a part of a culture that appropriates BIPOC music, style and slang but degrades the people these things originate from.  It’s gentrification of entire neighborhoods and cities and pushing disadvantaged people to the fringes, and then punishing them by criminalizing their addiction and mental health issues.  It’s boasting diversity while criticizing affirmative action.  It’s believing in false historic narratives and underplaying the importance and trauma of slavery.  It’s Thanksgiving, quite honestly.  It’s telling people to go back to their country when your own ancestors were colonizers and invaders.  It’s getting married on a plantation.  It’s denying the genocide and oppression of millions ON WHICH THIS COUNTRY WAS BUILT.  It’s conveniently forgetting that entire generations of white people where raised by black women.
Racism is NOT NEW.  How dare you say you didn’t know how bad it was?!  It’s everywhere.  I was a teenager in Bulgaria with limited resources and a still narrow world view and I knew—from music and books and films...
If you care, you know.
If you know, you do something.
Everything else is a falsehood. 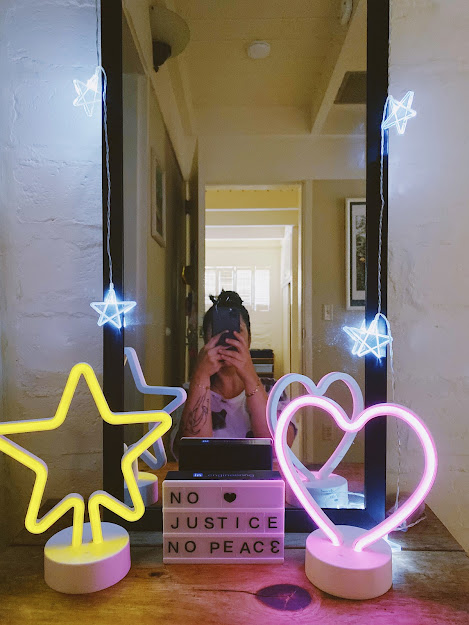 On Trump: a prelude (or Are We Great Yet?!)
Do you like what America has become ever since Trump came to power?  Do you love how things are going?  Do you feel safe and happy, prosperous?  Do you agree with his policies?  Do you support his bigotry, his misogyny, his unmitigated racism, his ignorance, his petulant behavior, his insults and lies?
I can tell a tyrant when I see one.  Not only Trump is a big fat bully, he’s also malignant, mercenary, and most likely mentally incapacitated.
I am done listening to APOLOGISTS.  No, his supporters are NOT good people.  They are either so delusional to think that he’s really working to make America great for them (which is incorrect as Trump’s interests only align with those of big corporations and far-right conservative organizations) or they simply don’t CARE enough about the damage done to millions of Black people, immigrants, minorities, and the disenfranchised regardless of their color.
Trump is a DEMAGOGUE, and I will not take anyone seriously who tries to convince me that there’s any point of his politics other than fucking people over.  No health care, no environmental protections, wider wealth gap, restricted immigration, propaganda and colluding, feeding racial tensions, saying and doing one stupid and harmful thing after another.
Get out of here.
Also, I’ve been attacked a lot since I started working for Black Lives full time, and I don’t mind.  All the things I’ve been called are nothing compared to what Black people experience day in and day out.  This is not about me.  It’s about making it so that when a Black woman is being outspoken and passionate, she is no longer stereotyped as “loud” or “rude” or “too much”.  No snide comments would ever come close to having a cross burned in your yard or being denied a job because your name is too “ethnic”.
Bring it on.
I can take it and still do the work.
On Karens:
This is for all white women.
Hello!
It’s 2020, and it’s time you guys get the memo.  Being a #Karen is not cool.  Not kind.  Not okay.
Don’t get caught on the wrong side of history.  Be a decent human being.  Be enlightened, make educated choices, have informed opinions.  Evolve.  Check your privilege, count your blessings, and put yourself into a better use for the greater good.
DO GOOD RECKLESSLY.
Stop calling 911 on black people for being black.  Stop feeling threatened by the illusion of your own misconceptions.  Shed the stereotypes you harbor.  Get with the program!  Start solving your own problems instead of demanding for BIPOC to educate you and make you comfortable.  Don’t be racist. Don’t be an insolent fool.
Thank you. 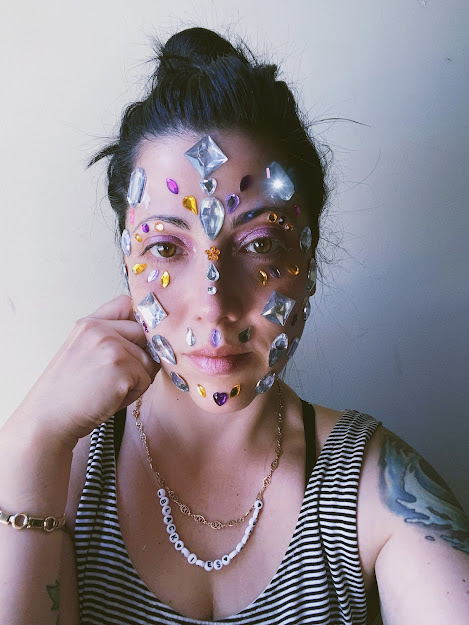