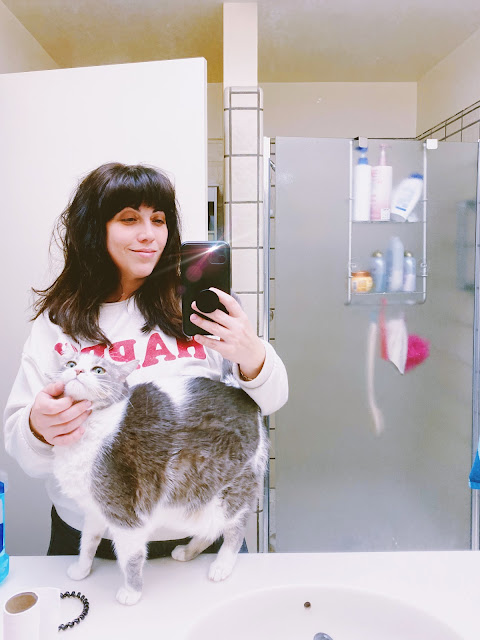 Shelbycat: a girl made of love.

A BIG girl, an absolute unit, a bonafide CHONK.  Wasn't always; she's a comfort eater, and she needs a lot of comfort because she's scared of everything.  Look at her funny and she'd slither away, belly dragging on the floor.  Even on her best days she looks like an AT-AT walker--thin legs under a massive torso.  Shelbysaurus.  She used to play and talk a lot when she was younger, but then the kids came along, and now Sparkles, and these days she prefers to sleep for 14 hours in her kitty cave (aka my closet) and emerge only after the boys go to bed.  Darkness gives her just enough bravery to come out in the living room and sleep some more, but near us.

Shelby will be 10 this year.  10 years of being my pillowcat, my sealpup, my personal pet raccoon.  That belly of hers, that's the sweetest spot on Earth; if I'm having a bad day, I sometimes put my face in her bellyfur and I instantly feel better.  It's white and pink, and ultra-soft.  SOF, so be exact.  She had bad teeth from the start, tiny teeth and some are missing.  Tuna breath.  But this doesn't stop her from stuffing her face!  Her claws, though.  They are like needles.  Good thing she never, ever scratches.  She doesn't bite either.  She hides when in "danger" and puts her head in a corner, acting like she's not there.  Funny self-preservation instinct.  But she can't hunt or fight for shit.  She growls and hisses at Sparkles, and bops him on the head, softly, then runs.  Run for your life, Shelbycat!  And you see those fuzzy bottoms wiggling side to side as she stomps away.  So squishy, so pure.

My spirit animal, Shelby is.  She loves me like no one else, and I do too.  Once in a lifetime cat.  She gives me stinky kisses with a tongue made of sandpaper, licky-licky.  She has eyelashes.  A Peepcat: she likes to stare sometimes, and also a Puppycat, because she follows me around.  She jumps on the bed when it's time for sleep, purrs, then jumps down.  Any movement is too much movement.  She can't take it, her anxiety is hilariously disproportionate considering how quiet and kind our house is most of the time.  All threats to her wellbeing are totally imagined; I suspect she didn't have a great kittyhood.  At night she often comes and plops on my chest.  It's suffocating, but also pleasant..  A fatty kittycake, sniffing my mouth.  I don't know why she does that.  The moment I wake up and pet her, she leaves.  She lets the kids pet her.  She's a good big sister to them.  They can't lift her up, thankfully.  Shelbycat looks very uncomfortable when she's being carried.  Embarrassed, almost.

A white triangle in the middle of her back, a wishbone at the base of her tail.  Pink candy paw beans.  A spot on her nose that looks like she has food on her face.  Green eyes, pretty.  Meh-meh!  She talks when she wants to go OUTSIDE.  I let her on the deck for a few minutes of fresh air.  No bird of prey can possibly grab her.  Shelby weighs as much as a medium dog, or a very small hippo.  Slow blinking to say she loves me.  Gosh, I adore this cat.  She's only mine, relaxed and happy with me only.  I give her catnip and watch her roll on her back and rub her smooshy face in it while making noises: Mrrp? Bwurr?  So cute, so saucy.  Shelbycat can be a grump, but mostly she's an angel.  Sorry, Sparkles.  She only plays with me.  It's a game called "I'll lie over here, close but not too close, and you give me pets and I'll purr."

Here's to many more years of pure love and hair everywhere!