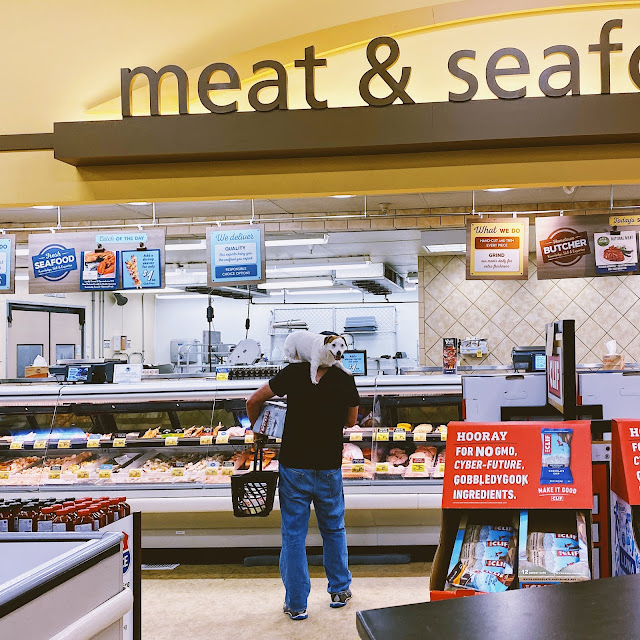 Years ago, I heard a rumor about a  grocery store unlike any other called Whole Foods.  It might as well have been called Holy Foods, because one of the requirements to shop there was to be anointed by your local Boujee Moms’ Club™ at a secret Essential Oils Pyramid Scheme ceremony and/or to drive a Prius, otherwise you would spontaneously combust upon crossing the threshold.  I was neither, so I kept getting my groceries at Safeway like a peasant.

But the time came when I made my way up in the world, and since I moved out of the Bay Area to Monterey Bay, aka the ultimate fuck-you in Silicon Valley’s general direction, I bought a Tesla and I attended a session of Holistic Yoga at the Esalen Institute , which served as a right of passage to finally walk through those green sliding doors and enter Capitalism with a Twist of Philanthropy.  Of course, by then Bezos had bought the whole operation, and now the philanthropy part was just ornamental, but one can easily overlook this by choosing to donate the 5 cents one saves from bringing a reusable shopping tote bag to a charitable cause, such as supplying local hipsters with typewriters.

The atmosphere inside Whole Foods immediately puts you at ease which is good because, in contrast, the parking lot outside can be rather stressful—nothing gets in the way between all these Lululemon enthusiasts and their chia-seed, gluten-free crackers.  The smiles of the cashiers are genuine.  They are young, cool, and seem like they very much want to be here, unlike the cashiers at Trader Joe’s (the knock-off Whole Foods) who are obviously working there until their acting career takes off, and definitely unlike that one Safeway employee who slipped a note to me once saying “I am being held against my will, send help”.

Whole Foods at Del Monte shopping center is another level altogether.  I thought it was the nicest, fanciest place I’ve ever bought individually wrapped pine nuts from when I first visited, but then...hear this! they remodeled it and made it even nicer and more fancy.  Now the toilets have sensor operated hand dryers directly built in the sink faucet AND a designated cosmetics expert who follows you around, gently whispering affirmations, ASMR-style, in your ear.  Josh, the vegetable guy, is always high, but that doesn’t stop him from talking to you about “what’s the right amount of kitty cats to have” in between recommending you the perfect seasonal, organic, fair trade, non-GMO gourd.  Oh, they sell the usual stuff like fresh fish, plant-based burger patties, and dairy-free products, but they also have hand-delivered eggs from pet chickens, and actual chickens you can buy to keep as pets.  Speaking of pets, Emotional Support Raccoons are welcome (if not required).

The customers are so diverse, so cosmopolitan, and they literally sing as they frolic around the isles.  There’s the white guy with dreads, and there’s the one (1) black guy who is given extra Amazon Prime discounts just for showing up three times a week.  There’s the kooky old lady with the green hair, and the gaggle of Karens who are obviously Republican but the Manager actually enjoys it when they ask to speak to him, plus this is a safe space where judgement stays at the door, right next to the $300 a pop bonsai trees.  Avocados galore, stinky cheese from around the world, and a state-of-the-art Bakery, where only 45 percent of the goods are made using palm oil (compared to  150 percent anywhere else, because who needs orangutans or trees or oxygen?!).

No plastic straws, of course, and the utensils are made of ostrich dunk by Maasai Warriors.  It’s exciting, be it a bit overwhelming, to test three different kinds of collagen powders for glowing skin, and a few ginkgo biloba/CBD/tears of virgins concoctions for good memory.  Cue the latest hits on the loudspeaker, not some generic Muzak, and give it up for spending a small fortune on four items you didn’t know you needed, but that won you the approving looks of both Aphrodite, the friendly cashier who has a PhD in Neuroscience, and the homeless (by choice!) man behind you at the checkout who invests all of his earnings in cognac infused wild-picked moss from Romania ($25,99/ounce).

It’s clear that you are in the Club now, and you walk out with a heightened sense of purpose and smelling profusely of patchouli.  Australia might be burning, we might be on the brink of WW3, the measles and the plague are back, but at least your shampoo is vegan and bunny-friendly!

12/10 will keep coming back for more forever, or at least until the crack cocaine in the beignets wears off.