Females Are Strong As Hell 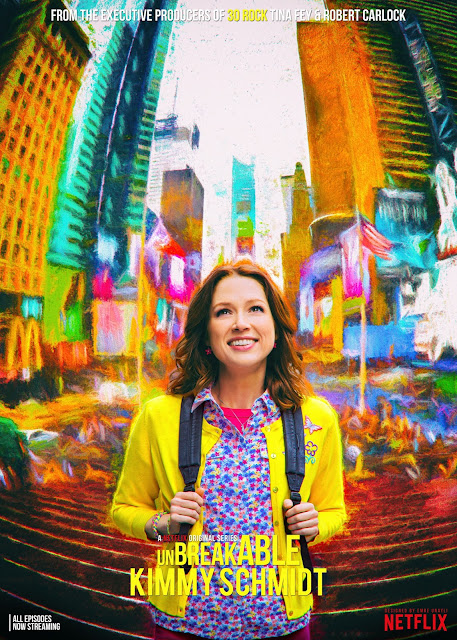 
I wrote this as a FB post a year ago.  Yesterday Netflix released new Season 4 episodes and I just had to dig it out from the archives and share it here.

There are good shows, and there’s Unbreakable Kimmy Schmidt.
Its genius is packaged so well into the genre of a feel-good comedy that it takes most people, including myself, a few episodes to realize what they are really watching — a true Golden Age of Television masterpiece.  By then, you can’t stop watching, and with a running time of 25 minutes per episode, it’s a binge fest at its finest.

Unbreakable Kimmy Schmidt is everything.  Literally.  It’s sitcom spoof in the spirit of the funniest SNL sketches, it’s an absurdist, anecdotal comedy full of pop-culture references, it’s a character study with witty dialogue.  It’s full of one-liners, deadpan humor, timeline twists and flashbacks, and it spontaneously bursts into song, Broadway-style.  It can change from slapstick and physical comedy to the most clever, sharp, and nuanced political satire in the span of a single episode.

All in all, this show will have you laughing like the child Kimmy Schmidt is at heart.

Set in New York City, it chronicles the journey of 29 year old Kimmy — a character played by Ellie Kemper and inspired by, I presume, Peter Pan or Pippi Longstocking — who has spent the past 15 years captive in an Indiana bunker after being abducted by a self-proclaimed cult leader, played by Jon Hamm.

In the bunker, along with three other women, Kimmy was told that Doomsday had happened and the outside world had been nuked, but “Gosh” had spared them to serve the Reverend by rotating a Mystery Crank and obeying his heavily-influenced-by-Fox News-preachings.

The only thing that keeps the women going, and relatively sane (except Gretchen; she’s totally loving the whole cult thing), is the hope that they’ll escape one day — a hope fed by their own imagination.  They battle isolation and sensory deprivation with role playing, and whenever one of them reaches a breaking point, Kimmy is always there to bring her spirits back up.  Kimmy is always positive, hopeful, cheery and resourceful.  She’s Unbreakable!

As it turns out, the Reverend is nothing but a small town guy who (very badly) DJ’s at weddings in his spare time and dreams about being on the Apprentice; and the mystery crank is nothing but a manually operated generator providing electricity for his private bunker chambers.

Eventually, the women get discovered and freed, he goes to jail, and Kimmy moves to New York City to start a new life.  She wants to shake her past and be more than a Mole Woman — a term coined by the press — and she refuses to be a victim.

Kimmy’s journey is depicted in the next four seasons, in which she tries to make up for all the time she had lost in the bunker, and we see her evolve from a traumatized teenager to a strong, independent young woman.  The humor stems from the fact that she’s perpetually stuck in the nineties and doesn’t know that “Macintosh now make phones with cameras and maps”, and the drama comes from how endearing her efforts are to keep smiling while living in a closet of an underground apartment that is “not actually a sideways tugboat” where asbestos snows down from the ceiling, on the corner of Pizza Rat Boulevard and Biggie Smalls Avenue.

Her companions are Titus Andromedon — her roommate; Lilian Kaushtupper — her landlord; and Jacqueline Voorhees — her employer.

Titus is a struggling actor.  He possesses enormous talent but he’s somewhat of a diva, though not because he can afford it, but because he’s too sensitive and fabulous even for the multifaceted and flamboyant New York art scene.  He is his own worst enemy, self-sabotaging his way to fame and happy relationships.

Lilian is a batshit crazy motherly figure who keeps undisclosed number of dead cats upstairs and is hellbent on preventing her authentic neighborhood from being taken over by hipsters and banks.

Jacqueline is the epitome of an obscenely wealthy white woman living on the Upper East Side.  She married rich after trapping millionaire by getting pregnant, and now runs the high society with her purse pooch under her arm which gets weekly massages and has its anus bread out.

Again, however, stereotypes are not what this show’s interested in.  Titus might be the fun gay best friend at a first glance, but he’s also a black man who came to the big city from Deep South Mississippi, where he had to act straight by posing as a jock and marrying a woman.  Lilian is at the forefront of the war on gentrification and represents the 99%, echoing the Occupy Wall Street movement.  Jacqueline is actually a Native American woman (!)who wears blue contact lenses and longs for the approval of her traditional parents, while struggling to fit in both worlds but fitting in neither (she’s too kind to completely turn into a Stepford Wife but isn’t Lakota enough to avoid referring to Buffalo as “furry dogs”).

As these characters develop and reveal more of their back stories — while getting themselves in the most ridiculous and hilarious situations — we see the true intentions of the the show creators (Tina Fey): an elegant but devastating criticism of the most pressing issues our society faces today (Trump) in the form of puns, parody, and fun plot twists.

Kimmy Schmidt sets off to make a life for herself and deal with her trauma, but she also improves the lives of everyone around her in the process.  She makes sure the Reverend stays behind bars forever, encourages her former bunker sisters to move on, empowers Jacqueline to divorce her cheating husband, and supports Titus’ career.  It’s just wonderful!  Plus, people are always either “blimping” in and out of places, or buying expired mayo from the corner Bodega to use as a face moisturizer.

You start watching to forget the news and you end up with the most thorough and thoughtful analysis of current events: Kimmy and friends break down the crap out of sexism, racism, and classism, and they do it ever so effortlessly.  I simply cannot recommend this show enough!

Not just the main characters are multi-dimensional; the supporting roles, too, are so well-rounded: Jacqueline’s step-daughter Xanthippe seems like a spoiled brat but she’s actually a straight A student (and straight-edge otherwise); Mikey, Titus’ on-and-off boyfriend, is a construction worker (with a thick Italian-American accent and an atrocious Tilda Swinton automotive paint job on the back of his truck), whose coming out journey includes rejecting toxic masculinity; Deirdre Robespierre, another trophy wife and Jacqueline’s nemesis, is actually a highly-educated woman with an IQ of 150 who quotes Shakespeare when in distress.  Watching them all cross paths and interact is a delight!  Oh, and Tina Fey herself plays a prosecutor who suspiciously resembles Marcia Clark.

I found the first two seasons to be the funniest, but the fourth season is deeper, brilliant.  It zeroes in on the Trump insanity and the MeToo movement, and it gave me a wonderful sense of validation and inspiration.

This is not to say that Unbreakable Kimmy Schmidt went on without controversy; it’s been criticized for the portrayal of Native Americans and the use of yellow face.  But in the complex and overly sensitive world we live in, the show definitely manages to present these things on a scale that’s less offensive and more self-deprecating: it is very aware of the liberal echo chamber we tend to exist in, and it examines it the best way possible: through humor.

Go watch immediately and see for yourself!