Skip to main content
Labels
By Bobby Pfeiffer Tuesday, May 09, 2017

The Sound of America

The sound of America is the ignition of a car engine.

If you put a camera over the parking lot, you’ll see cars back out of their spaces and off they go, flowing one by one into traffic.   It’s like the beginning of a movie when they speed the reel up, only it’s not a movie but an ordinary weekday morning.  Headlights, break-lights, blinkers: watch them draw long yellow and red lines on the two-eighty and the one-o-one.

Being on the freeway is like being in one giant neon sign.  Rivers of silver Toyotas sprinkled with black SUV’s and red GM pickups: watch them merge and speed onto the carpool lane.  The drivers are still sleepy and the traffic makes them grumpy, but they can’t help it because there’s just no other way to get around.  People are in their own private bubbles, unquestioning, flying with 70 mph towards meetings they don’t want to be in.  Watch them sip coffee and fiddle with the radio.  They frown slightly without even knowing it because it all seems hauntingly familiar.  The roads are omnipotent.  You must rule out the probability of death-by-auto, and keep stirring, keep hitting the gas.

America is the ever-near drone of motors, the noise of rubber meeting asphalt, and the occasional lonely honk.  There are no church bells or crowing roosters.  There are no human voices here. 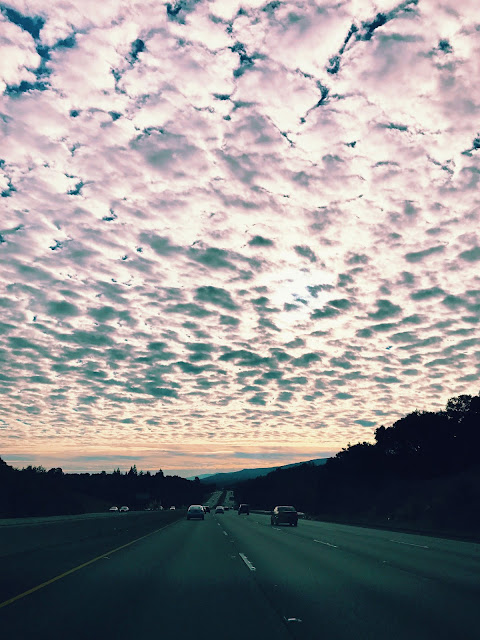